Last October, I wrote about the differences in how Breast Cancer and Parkinson’s Disease are perceived in the general public.   Unfortunately, not much has changed in the last year.  Since October is Breast Cancer Awareness Month, I would like to revisit the topic.

This past April, during Parkinson’s Awareness Month, it was once again, very difficult to find anything outside of the Parkinson’s community that made people more aware of Parkinson’s Disease.  Even though April marked a major milestone for Parkie’s, the 200th anniversary of James Parkinson’s groundbreaking paper on the “Shaking Palsy”, PD still remains the disease that no one wants to talk about.  Yes, there is the occasional feature on tv news, usually of a boxing class for people with Parkinson’s, but not much else.

Breast Cancer, on the other hand, is still the “sexy” disease.  Numerous people participated in the Revlon 3-Day walk in September, complete with silly costumes.  My guess is that some of them joined for the fun, not because they or a loved one has Breast Cancer.  Everyone wants to find a cure for Breast Cancer, so these people support it because it is a good cause.  I can’t imagine anyone without a connection to Parkinson’s doing the same thing.  In addition,  I am waiting to find out what pink items the department stores will be featuring next month.  After all, these are things I must purchase to find a cure.  They can’t do it without me!  No one asked me to buy anything to find the cure for PD last April.  Someone needs to come up with a campaign to improve the image of those of us suffering from Parkinson’s.  We really do deserve it.

So here is my post from last year.  Do you have a similar story?  I would love to hear from you about your experience.

Almost eight years ago, I was diagnosed with Parkinson’s and Breast Cancer in the same week.  Obviously, it was a week when I wished I had just stayed in bed and hid under the covers.  How do you react to the news that you have not one, but two major health issues that will be with you the rest of your life?

Much of the next six months remains a blur to me.  I underwent a lumpectomy and radiation for the breast cancer.  A neurologist put me on ever increasing doses of Requip, and my estrogen patch was taken away from me.  All of this meant that I slept all day, was plagued by hot flashes all night and pretty much walked around in a fog all of the time.

Somehow I was able to come to terms with having breast cancer immediately.  My mother had it, my sister had it.  It is the disease that most women fear most.  And it is the disease that is talked about everywhere.  October is Breast Cancer month and there are a lot of stores that celebrate by producing Pink Products, or should I say Pink Profits?  It doesn’t matter how useless the Pink Products are, we buy them anyway because it makes us feel like we are doing something positive.   Celebrities talk with pride about recovering from breast cancer.  There are rallies and walks to raise money.  I even corralled my friends to walk with me as a team for the Revlon Breast Cancer Walk that first year.  We wore our Pink boas with pride as we finished our 5K walk and entered the field at the Los Angeles Coliseum where the Olympics were held.  We were Champions in Pink!  Breast Cancer is fashionable.

But Parkinson’s is another story.   It was hard to come to terms with

that diagnosis.  I wasn’t that old (57), I wasn’t a man, I didn’t shuffle, and I didn’t know anyone else with PD in my family or circle of friends.  It was something my friend’s parents had, but they were much older and didn’t move very well.  There were no Parkinson’s products for sale in the department stores during Parkinson’s Awareness Month.  I didn’t even know there was a Parkinson’s Awareness month until this year.  Parkinson’s events were not well publicized.  After all, who wants to go to an event where everyone is shaking, drooling and shuffling?  Parkinson’s is definitely not fashionable.

I was active, playing tennis, going to yoga, traveling and enjoying life as much as possible.  I didn’t have time for a chronic degenerative disease.  I just had a tremor, so I tried to hide it.  And I kept trying, but after a while, people started to notice.  I thought that if I didn’t say anything, it didn’t exist.  So I did what my friends and I call the “Parkie hand-hiding strategy”.  You know the one where you hold your shaking hand, sit on it, stick it into a pocket or purse, or do some other strange maneuvers just to prove that it isn’t shaking.

But of course, that didn’t work and I was only fooling myself.  So why couldn’t I admit it to myself?  Why couldn’t I tell others?  It took a lot of therapy and writing my personal narrative for me to confront what I called the “Elephant in the room”.  Once I started to write my narrative, which only my therapist was privileged to read, things started to 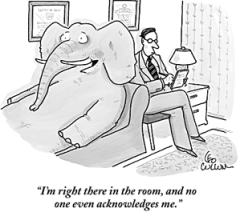 change.  I started to write about life with PD.  But only for other Parkies.  The rest of the world still didn’t need to know.  And then one day, I made a mistake.  I posted something meant for my Twitchy Woman Facebook page on my public Facebook page.  And the world didn’t come to an end.  Wow!  I was outed.  And it was okay.

So now I have embraced my PD.  There is a wonderful world of people in the Parkinson’s community that I have met.  The time I spent last month in Portland at the World Parkinson Congress was an eye opener.  I was able to meet some people who I have corresponded with through this blog.  I talked to doctors, therapists and researchers who valued my opinion.  I  spent time with new friends and old friends, looking for answers and camaraderie.   We have a common bond and we understand each other.  And we don’t all shake, drool or shuffle.  In fact, we spent a lot of time working to dispel that image. We all have the Elephant in the room, reminding us that life is not the “normal” that it used to be.  But that elephant is getting smaller and smaller, and one of these days, hopefully very soon, it will be banished from our lives.

Twitchy Women hosts a series of webinars on Zoom for Women with Parkinson’s Disease every other Sunday morning at 10 am Pacific Time.  To maintain privacy for this group, we ask that care-partners and family members not attend unless an event states that registration is open to all.

The National Institutes of Health has awarded Cleveland Clinic researcher Jay Alberts, Ph.D, a 5-year, $3 million grant to conduct a multi-site clinical trial to study the long-term effects of aerobic exercise on slowing the progression of Parkinson’s disease. This project, using Peloton bicycles, will be the first long-term investigation of the potential for aerobic exercise to arrest disease progression.

Register here to learn about this exciting study and find out how you can get involved.

Linda K. Olson lost both of her legs and one arm when the car she was traveling in was hit by a train. Then 5 years ago, was diagnosed with Parkinson’s. You can watch her amazing story as she told it by clicking on the video. Then join us on October 18 to hear more from this most inspiring woman.

For more information on each webinar, click on Twitchy Women Information and Events