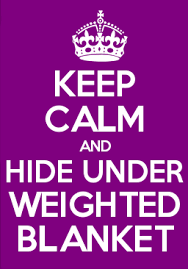 Several months ago, my daughter suggested that I try a weighted blanket to help me sleep.  At the time, I had never heard of weighted blankets.  Today, they seem to be everywhere, claiming to cure all that ails us.

Weighted blankets were originally used as a calming mechanism for children with autism, ADHD and other sensory disorders.  Anyone who has a newborn has seen the calming effect of a swaddle when putting the baby to sleep.  “ThunderShirts”  for pets (weighted vests) help keep them from going bonkers during thunderstorms and fireworks.  We like to be cuddled, so what could be better for sleep than the cuddling effects of a weighted blanket.  Even on the hottest nights, many of us still need the weight of a blanket on top to help us sleep.

Last year, the concept took off, with kickstarter campaigns and word of mouth on social media.  These blankets are everywhere.  So when at Bed Bath and Beyond last month, I saw a display of weighted blankets, I decided it was time to check them out.  Armed with my 20% off coupon, I bought a Nap blanket made by Brookstone.  I was not familiar with the other two blankets they had on display, so checked out reviews on my phone before deciding which one to buy.

One caveat, if you have not been lifting weights, ask someone to help you.  These blankets are heavy, as advertised, ranging from 10lbs to 25 lbs.  Most are filled with glass beads or pellets to make them heavier.  It is recommended that you get a blanket no more than 10% of your bodyweight, so I bought a blanket based on weight, not size.  Since we have a king sized bed, this blanket was not quite wide enought for both of us to use at the same time.  It became clear that we needed a second blanket. One question I have is:  do we want a blanket that is larger and 10% of our combined weight to share?  I could not find the answer to that question.   For more information on buying weighted blankets, check out this article from the Washington Post.

After a couple of nights with our new blanket, I noticed that I was definitely sleeping better, although not necessarily longer.  I was falling asleep almost immediately and was not waking up as often during the night.  I also seemed to be dreaming more, meaning that I was getting more good REM sleep.

Since we seemed to be fighting for the too small blanket, it was time to get a second one.  So after much more research on the internet, I settled on a slightly larger, heavier   BABO Weighted Blanket.    I liked this one immediately.

The glass beads inside were small and distributed evenly, so it did not have the lumpy feeling of the Brookstone blanket.  One side of the duvet cover is warmer for winter, the other side is made from bamboo, so it is supposed to be cooler for summer. This blanket is more expensive, but definitely seems worth it so far.

Remember how cozy it was as a kid to be covered by a pile of blankets?  Think of the weighted blanket as the new version of this, with some added weight.  Sounds good to me!

5 thoughts on “Weighing in on Weighted Blankets”

Twitchy Women will be hosting a series of webinars on Zoom for Women with Parkinson’s Disease every other Sunday morning at 10 am Pacific Time until the Covid-19 restrictions are lifted.

May 3: Sketchbook Journaling with Kat Hill

For more information on each webinar, click on Twitchy Women

Stuck at home because of the Corona Virus?

Join us – this and  every morning – for

8:30am pacific time
Join us on Zoom at
https://zoom.us/j/892427106
fun tips for having fun and not being alone while you are stuck at home with
Amy Carlson
Davis Phinney Foundation Ambassador

is hosting a series on social distancing.  Click here for more information.