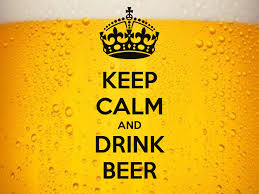 Today I read an article posted by the Davis Phinney ‏Foundation  about the possible benefits of Beer for protecting the brain against Alzheimer’s and Parkinson’s.  We can now add that to the list of beneficial foods that include Chocolate, Coffee and more.  This presents a bit of a problem since beer on tap is a no-no if you are taking Parkinson’s meds.  Besides, how much beer do you need to drink for it to be effective?  According to the article you would have to drink 2000 liters a day!  But the researchers will spare you the burden of having to drink all of that beer.  They say that a flavonoid compound found in hops will help protect the brain.  So we can just pop another pill when they figure this out.  This is beginning to sound like Woody Allen’s movie Sleeper, where his character wakes up 200 years in the future only to find out that everything we thought was bad for us is now good for us.

Dr. Aragon: [chuckling] Oh, yes. Those are the charmed substances that some years ago were thought to contain life-preserving properties.

Dr. Melik: You mean there was no deep fat? No steak or cream pies or… hot fudge?

Dr. Aragon: Those were thought to be unhealthy… precisely the opposite of what we now know to be true.

So, if it is true that beer, chocolate and coffee can protect our brains, then why do people who partake in them develop Parkinson’s?  I wonder what other foods are being explored for their neuro-protective value.  I have been drinking coffee for years, and eating a lot of chocolate, too, but it doesn’t seem to have worked for me so far.   I think I need to do some more research.  Make mine a double espresso with chocolate, please.

All Twitchy Women programs are free to all who participate. However, they are not without cost. It takes resources to continue our work and we cannot do it without your help.  I have partnered with the Parkinson’s Wellness Fund so that those who want to provide support can do so.  You can support Twitchy Woman by clicking here. 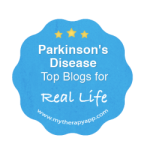 Twitchy Women hosts a series of webinars on Zoom for Women with Parkinson’s Disease every other Sunday morning at 10 am Pacific Time.  To maintain privacy for this group, we ask that care-partners and family members not attend unless an event states that registration is open to all.

Everyone has a story.  We may think our personal stories are nothing special, boring, blah.  Yet if we are brave enough to tell a story, we find people are fascinated by our lives…even what we think is mundane.  Join Carol Clupny, author of the Ribbon of Road Ahead: One Woman’s Remarkable Journey with Parkinson’s Disease and Sharon Krischer host of   TWITCHY WOMEN and  PD blogger as they discuss how they have shared their PD stories.  You might even hear a good story or two.

Mandy Shintani, Occupational Therapist and gerontologist from Vancouver, Canada who developed the ACTIVATOR trekking poles for Parkinson’s disease will join us. Mandy will talk about the research and the benefits of poling for PD.  For more information go to www.urbanpoling.com.

Register here to join us.

Dr. Mathur is a family physician living outside of Toronto, Canada who had to resign her practice following a diagnosis of Young Onset Parkinson’s Disease at age 27. She now dedicates her time to patient education, writing, and Parkinson’s advocacy. She is passionate about sharing with patients the coping strategies available to them in order to face the challenges of adjusting physically and emotionally to this disease. Find out more at her blog UnshakeableMD

For more information on each webinar, click on Twitchy Women Information and Events